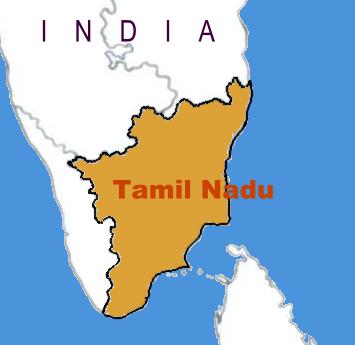 History of Tamil Nadu
dates back to 6000 years. It can be broadly divided into Ancient, Medieval and Modern Tamil Nadu. Many of the historians believe in the theory of the Aryan invasion in the South. The Tamils belonging to the Dravidian race had to move further South due to the invasion by the Aryans.

The History of Tamil Nadu consists of the rise of the different kingdoms under the then rulers. History of Tamil Nadu is a witness to the rise and fall of the several dynasties under their able and incompetent rulers. The Chola dynasty rose in power in Tamil Nadu between the 1st and 4th centuries. Karikalan was the first and one of the famous ruler of the Cholas. Later in the 9th century, the Cholas regained power under Vijayalaya Chola.

Rajaraja Chola was the greatest ruler among the later Chola rulers. It is during his reign that the architecture reached the pinnacle. Rajendra Chola I was the successor and the son of the ablest ruler Rajaraja Chola. He further expanded the kingdom of the Cholas and consolidated the empire as well. He even established a new capital called Gangaikondancholapuram to commemorate a political victory.

The Pandyas that came to prominence after overthrowing a decaying Chola empire. The Cholas were mainly known for their administrative capabilities, for the different constructions in the kingdom and for their aesthetic senses.

The Pandyas is considered to found the city of Madurai. This dynasty is well known in the History of Tamil Nadu for establishing trade contacts with the Romans and the Greeks. Their rule came to an end in the 14th century as they were completely shattered by the Muslim invasion.

The Cheras is one of the dynasties that ruled in the western part of Tamil Nadu. With their fall, the Vijayanagara empire was established to counter the Muslim force in Tamil Nadu. The Nayakas of this empire re-established peace and glory in the state till the British colonialism.

The history of the area dates back to more than two thousand years ago. Tamil Nadu was originally known as Tamilham and the proof of the Tamilham settlements are clear with the existence of ancient ports like Karipattinam, Arikamedu and Korkai. The birth place of Dravidian culture has witnessed several great dynasties. The Pallavas ruled in the 4th century A.D. The Cholas ruled between 1st and 4th centuries. They rose to power again in the 9th century, only to be replaced by the Pandyas in the 14th century. The East India Company started their factory in 1640 at Madras. They fought with the Dutch and the French to establish their supremacy. Tamil Nadu has contributed a lot in the country's struggle for freedom. After India's Independence, the state of Madras came into existence and 1968, the name was changed to Tamil Nadu.
READ MORE  HISTORY
TAMIL SCRIPT
TOTAL DISTRICTS LISTS
DISTRICTS SPECIALS
GEOGRAPHY OF TAMIL NADU
BEAUTY PLACE IN TAMIL NADU
Powered by